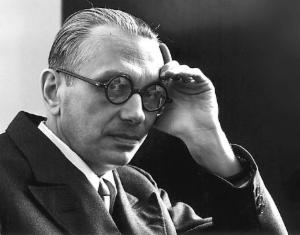 Dr. Kurt Godel (1906-1978) was an Austrian Mathematician who left for America in 1939 when Germany annexed his homeland. He rode the Trans-Siberian railway to Japan, and continued via San Francisco to Princeton New Jersey, where he joined his friend Albert Einstein at the Institute for Advanced Studies. Dr. Godel, logician, mathematician and philosopher, pursued the big questions of reality: what is it, and how can we know it? Most famously, in 1931 he derailed the half-century pursuit of a logical structure sufficient for all of mathematics (and all reality). His "Incompleteness Theorem" proved logic is insufficient to the task.

The nineteenth century ended with great optimism in science, and the belief that after a few pesky problems were sorted everything that needed doing would have been done and afterward there would be little for scientists to do but add precision and pose for pictures.

Great breakthroughs were underway in mathematics as well, and All-Star mathematician, Dr. David Hilbert (1862-1943), was moved to announce a to-do list for future generations of mathematicians. He presented his now famous list of twenty-three problems to the Second International Congress of Mathematicians, held in Paris in 1900.

Godel's incompleteness theorem stopped pursuit of the second problem by proving it unresolvable. He later developed half of the proof that Hilbert's first problem is also unresolvable.

Gödel’s work in the foundations of logic was revolutionary and his incompleteness theorem was stunning. It said there were things that couldn’t be proven either true or false within any logical system that was complex enough to have any application or interest. Until then there had been a notion, now realized to be naïve, that logic could solve any problem: any assertion was either true or false and a clever mind could demonstrate which, with an unquestionable proof. Mathematics was the province of unassailable verity. After Gödel the potsherds of that icon are less hopeful than humpty dumpty.

A logical system is considered “consistent” if none of the axioms (i.e. foundational assumptions) conflict with, or negate, each other. A system is considered “complete” if all assertions that can be made within the system can be proved either true or false. Gödel showed that if a system is complete it cannot be consistent, and if it is consistent it cannot be complete. An obvious conclusion is that logic, the practice of arguing veracity from accepted assumptions, cannot lead to total understanding, even within the constraints of the assumptions. There are always things beyond the reach of any logical mechanism, no matter how clever the logician. That is terrifying stuff to anyone relying totally on logic.

The whole notion of unprovability has proven confusing for many in and out of science and mathematics. What does it mean, to say something cannot be proved? Things are either true or false, aren’t they? Gödel seems to have discovered limiting boundaries on the world of our intellect.

Gödel collaborated with Einstein at the Institute for Advanced Studies and his influence rolls down to the present and the attempts by Stephen Hawking to develop his theory of everything (TOE).

And, finally, Gödel, like all great thinkers, continues to inspire and engage as both a neatly packaged icon for the public and as a player in the ongoing drama of human discovery.

Who in the world cares about incompleteness?